Of all the people working in the British film industry that started their careers at Maya Vision perhaps the most significant was Chris Collins, Senior Development and Production Executive with the BFI Film Fund. So it was with great sadness we learned that Chris passed away at the beginning of November.
Chris joined Maya Vision in the late 80s as a production assistant quickly rising to producer and helping shape Maya Vision along the way. By ’96 Chris had moved on to become a Development and Production Executive at the BFI and later worked at the UK Film Council, with Film Four and BBC Films.
It’s testimony to Chris’s talents and personality that so many filmmakers have contributed their professional and personal reminiscences to his memory. There are plenty of stories of Chris’s time at Maya Vision too but his friends and former colleagues here would simply like to add that he was missed when he left and is deeply missed now.

A longer tribute to Chris can be found here

Please also see an Obituary in The Guardian

Getting our priorities right

Everyone knows that film crews need coffee but not necessarily what it takes to get a caffeine fix in some locations. Here Mick, our soundman, brews up on top of an ancient mound from the Shang Dynasty, 1600 BC watched carefully by Michael. 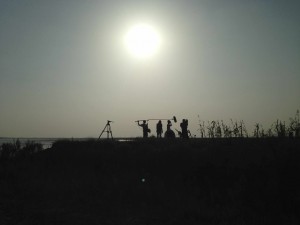 Filming on a pontoon bridge on the Yellow River. This was actually a rare sunny day with blue skies, sadly not caught on this camera! We were very fortunate as the bridge was undergoing maintenance work so the only noise was from a queue of trucks waiting patiently for it to reopen.