Michael trying on a Tang stone suit for size…

In Qianling Mausoleum, Tang Emperor Gaozong and Empress Wu Zetian share a burial tomb. Wu Zetian is the only woman to have ruled China. On her instructions the entrance to their mausoleum is lined with stone animals and human statues of the 61 foreign ambassadors who attended the Emperor’s funeral. Each figure is depicted in a long robe with a wide belt and wearing boots. The name of each individual and the country he represented is carved on the back of the statue. It is not known how or why but each statue has been decapitated at some time in the distant past. 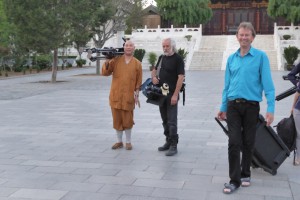 Everyone pitches in on Maya Vision shoots, even the contributors. In this case a Buddhist monks at the Temple in ? 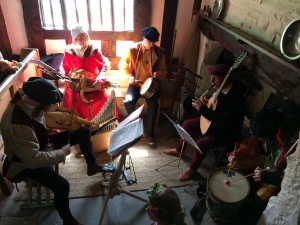 Waytes and Measures play in Mary Arden’s house in Wilmcote. A real life Vermeer in action…